How Cogeco increased its profitability by implementing a lean solution

Kaizen Blitz: before and after

A consulting firm hired by Cogeco was tasked with analyzing just how efficient the Ontario warehouse was with regard to best practices. Once all was said and done, the results were in, and they were dismal. The production line was in no way efficient. “At that time, nobody knew on the floor if we were productive or not because we had no way to measure, and we can’t improve something that we don’t measure,” explains Bill Jeffries, Cogeco’s warehouse manager.

The consulting firm was asked to teach the staff about lean manufacturing and to carry out a Kaizen blitz. So, over the course of an intense week, management and some of the field staff analyzed current production methods. Then, the entire team of 30 workers, along with the consultants, began implementing new practices for device repair.

The process was very intense—so much so that some of the staff took things personally. “We had people coming to tears, and apparently, it’s not uncommon,” explains warehouse supervisor, Gary Towers. “We had long-term staff that had been doing things the same way for so many years, and then you have someone coming in and telling them that what they are doing is all wrong.”

People were defensive and felt attacked. They only wanted to prove that their way was the right way and that the new process would not work. The Cogeco team eventually got over this hump, but it took a good year to see a real culture change.

After what they went through with the team, Bill and Gary said that you need to know that there is going to be a huge culture shock and more resistance than what you initially expect. Until the workers see the benefits, and they validate the new process, there is much resistance.

“We – the management team – were not even convinced ourselves,” confesses Gary. Now, both agree that the management team must all be on the same page, and they need to completely understand where they are going with the lean changes to sell it to their team. Gary adds that “Leaders have to 100% embrace and believe in lean, and until you turn this corner, there is not going to be any change.”

“The longer you have your staff, the harder it is to change because they have bought into their method of work for so many years. It’s not an overnight success, it’s an evolution, and it will be hard, but you have to say it to your team and be honest about it”, adds Gary. 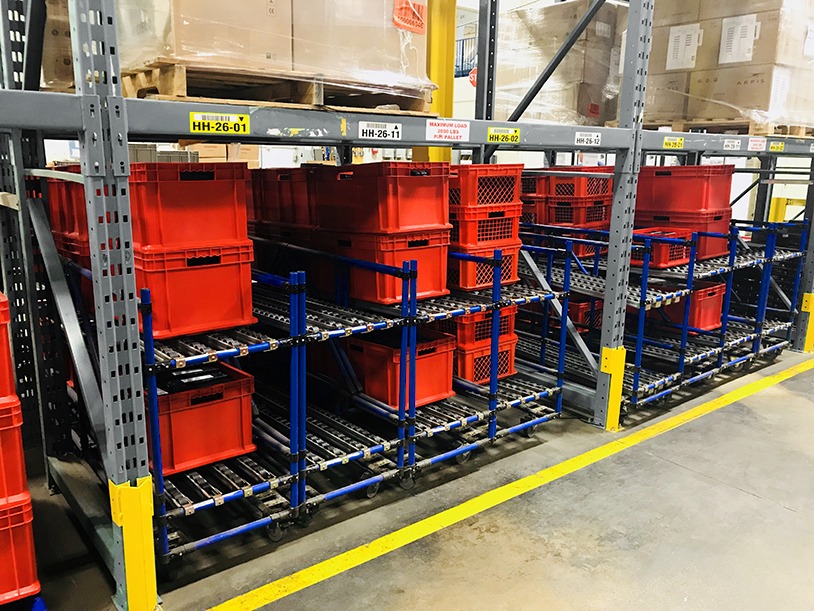 Cogeco saw its productivity level increase substantially following that first year of implementing lean manufacturing practices. However, they were unable to establish comparative measurements to previous years as they had no reporting at the time.

With the new processes, the employees focus mainly on reducing movement and transportation waste throughout the production floor and the warehouse. The team cut movements to a minimum by revamping the production floor’s layout and using custom-made modular gravity carts to meet their specific needs. That way, gone are the days when devices traveled a distance equivalent to 3 football fields in a 10,000 square feet factory! 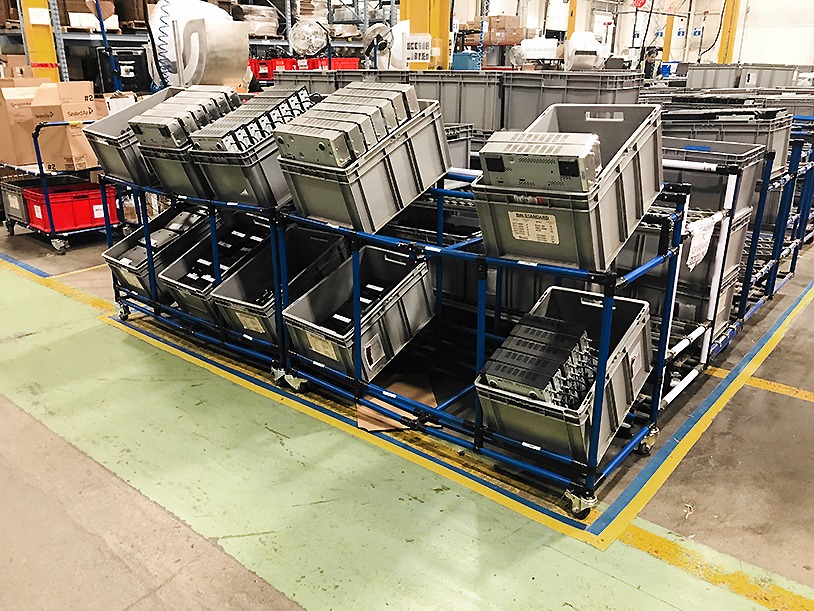 Given that Cogeco workers were very busy with the lean implementation and because the modular system was new to them, it was Flexpipe’s assembly team who built each structure in the first year.

After that, the workers began building carts on their own by copying and improving upon the initial designs. Brad, the maintenance leader, coordinates all projects relating to modifying the structures in the moonshine shop located in the warehouse’s entrance. 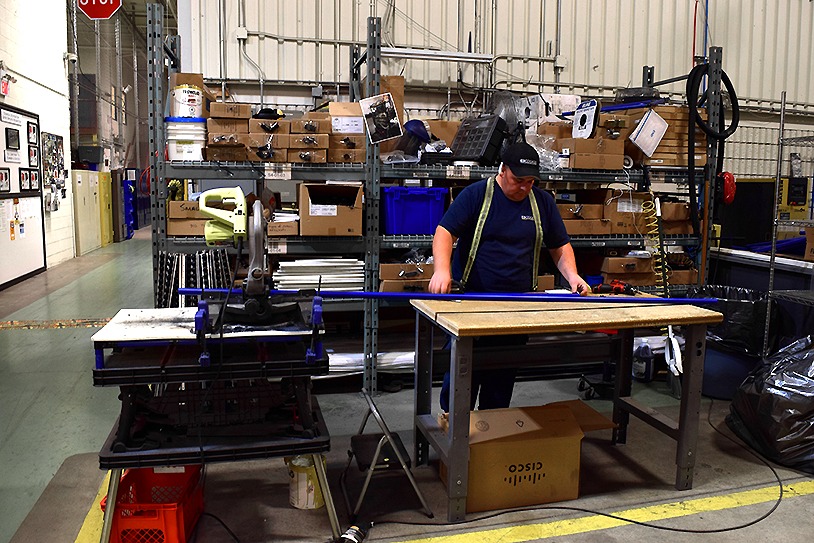 Before their lean transformation, Cogeco used to hire 21 casual production workers hired from a staffing firm. They were representing more than 40% of the production team. Nowadays, they only need four casual employees. One way they achieved this was to reconfigure the test stations into U-shaped stations. As such, one worker can do the job of 2 because racks are within proximity, and the processes have been changed slightly. 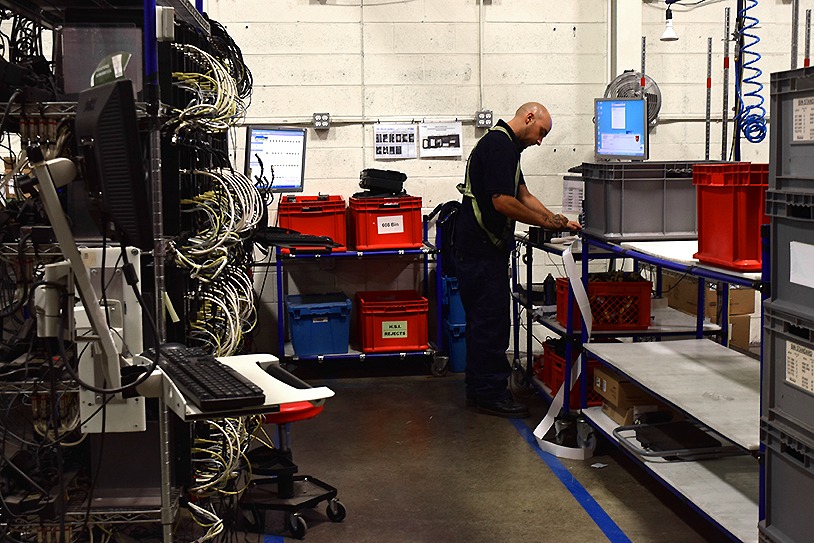 My job as a supervisor is easier now. 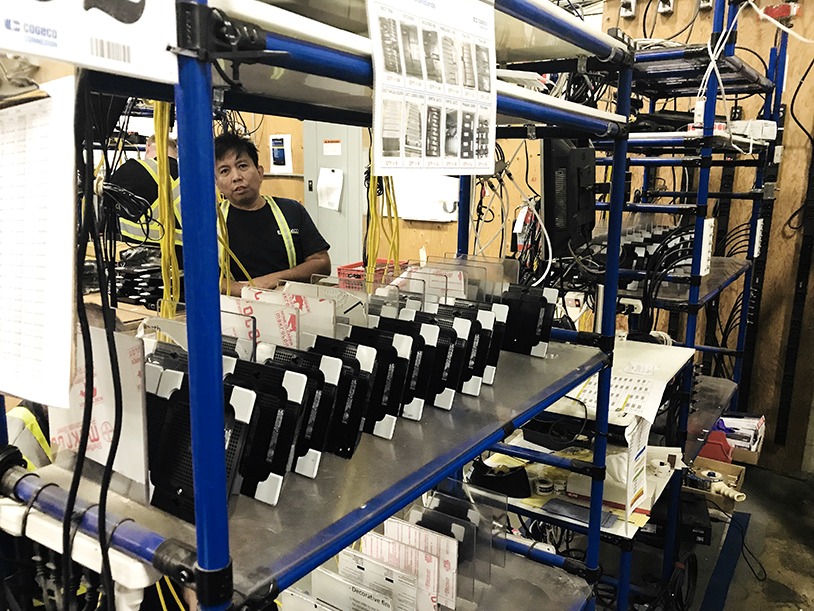 To conclude, one can say that resistance to change is pretty much inevitable when it comes to changing conventional processes and rearranging workstations. People need a lot of patience and must be 100% committed to it. A Kaizen Blitz was no easy feat, but Cogeco can now say that it was definitely worth it!

A Kaizen Blitz is around the corner?
Use our modular system!
learn more 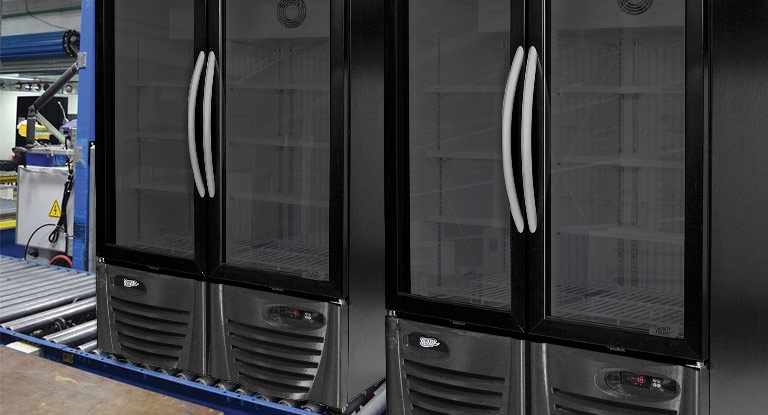